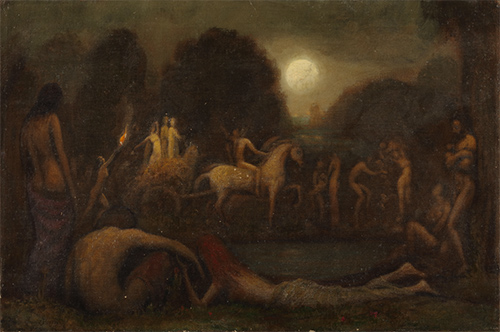 A leading member of the avant-garde Symbolism* artists movement in Chicago, Claude Buck moved there from his birth place of New York City in 1919.  He was known for his “fantastic, sometimes disturbing images with allegorical and literary themes” (Kennedy 97) drawn from writings of Edgar Allen Poe, operas by Richard Wagner, classical mythology and “New Testament” writings from theBible.  Some of these early paintings had nude figures rendered in Classical* style to express abstract themes developed through dream-like landscapes and disregard of relative scale or relatedness between the figures.  These paintings had Luminist* elements achieved with light-toned paints worked with transparent glazes.

In the 1920s to earn money by gaining public favor and also expressing his increasing disdain for modernism, Buck did a number of hyperrealist* portraits, figures and still lifes.  These proved popular and aligned him with the opponents of abstraction and their Society for Sanity in Art* movement whose headquarters were in Chicago.

Buck taught drawing and painting at the Chicago Academy of Fine Art from 1921 to 1926, and at the Art Institute, where he took over classes of George Bellows.

In New York City before coming to Chicago, Buck had a reputation as a radical artist.  He took his first art training from his father, William R. Buck, from the time he was ages three to fourteen, and then until he was twenty-two, he studied at the National Academy of Design* where he was nicknamed “Kid Hassam” because his painting reminded viewers of that of Claude Hassam.  Buck worked as a scene painter in the theatre and at the Willet Stained Glass company, and in 1914 began portrait commissions to earn money.

In New York, he founded a group named the Introspectives, which reflected his own problems with melancholy during that period.  Members, holding their first exhibition at the Whitney Studio in 1917, were artists who expressed their personal feelings and experiences and included Raymond Jonson and Emil Armin. In this phase of his career, Buck was focused on Old World styles of Leonardo da Vinci, Ralph Blakelock and Albert Pinkham Ryder.  In 1929, the Arts Council of New York voted him one of the top one-hundred painters in the United States.

His paintings are in the collections of the Santa Cruz Public Library; the Santa Cruz City Museum as well as the Spencer Museum in Lawrence, Kansas; the Brigham Young University Museum; and the Museum of Elgin, Illinois.