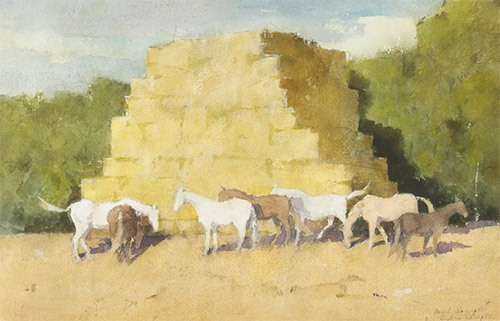 He was raised in the Midwest and attended Dartmouth College in Hanover, New Hampshire, where reportedly he slept through art appreciation courses because he was much more interested in sports and music.

He served in World War I in the Navy, and returned to graduate from Dartmouth. Shortly afterwards, he got tuberculosis, which led him to art because it was a more sedentary activity than his previous pursuits.

In 1925, he moved to California and enrolled at the Otis Art Institute where his teacher was Jonas Lie, and he took private lessons from Stanton MacDonald-Wright and Frank Tolles Chamberlin. By 1926, he was a faculty member at the University of Southern California, where he then chaired the art department. His quick acceptance launched his career; he spent his summers painting in Maine and Vermont.

During this time, he developed his unique style inspired by the Dutch master Pieter Bruegel the Elder and by influences of the American-Depression art movement called “Regionalism,” an affirmation of American life.

In 1938, he moved permanently to New England and became artist-in- residence at Dartmouth College. He lived with his wife and son in Norwich, Vermont, while maintaining his studio in Hanover, New Hampshire. In 1940, he was elected to the National Academy of Design, where he had already won many exhibition prizes, and major museums and collectors obtained his work.

During World War II, he also did illustrating of naval activities for Life magazine. After the War and until he retired in 1962, he did numerous New England landscapes as well as murals, portraits, and illustration ads.