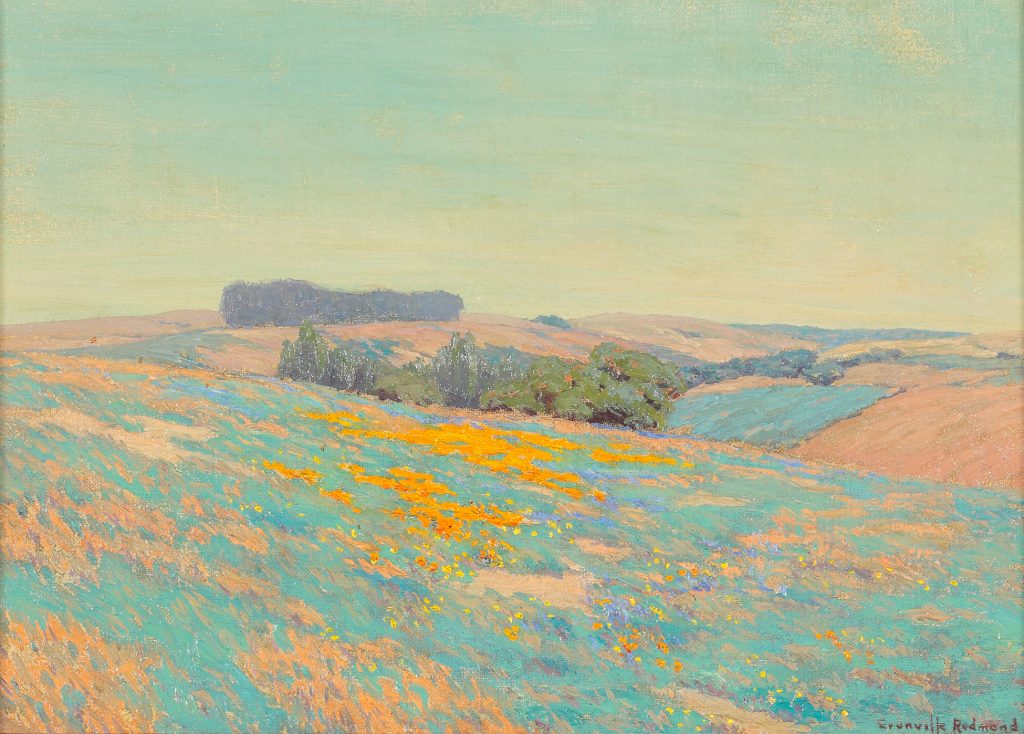 One of California’s most notable Impressionist* painters and considered the first resident Impressionist of that state, Granville Redmond is known for his landscapes, many of them floral with poppies and lupines.  He was also one of the first Tonalist* painters of California, a subdued monochromatic* style of haze, fog and moonlight that reportedly “he was more drawn to”. . .(Gerdts 27).   Redmond was also a popular personality and held friendships with many celebrities in the arts, despite certain physical handicaps of his own most especially deafness.

He was born in Philadelphia with the name Grenville Richard Seymour Redmond. At the age of two and a half, he became totally deaf due to scarlet fever, and lived his whole life without hearing or speech.  In 1874, the family moved to San Jose, and from 1879 to 1890, he attended the California School of the Deaf in Berkeley.  There his art teacher, Theophilus D’Estrella, who was also deaf, was a major influence, and Redmond decided to continue art studies at the San Francisco School of Design*.  His teachers included Arthur Mathews and Amedee Joullion.

Redmond distinguished himself, winning the W.E. Brown medal of excellence, and in 1893 was awarded funds from the California School of the Deaf, which made it possible for him to study in Paris at the Academie Julian* under Jean Paul Laurens and Benjamin Constant.  At the Academie Julian, he roomed with sculptor Douglas Tilden, another graduate of the California School for the Deaf.  While in Paris, Redmond distinguished himself once again, when in 1895 his large canvas, Matin d’Hiver, was accepted for the Paris Salon*.

At the California School of Design, he had become acquainted with many other artists including Tonalists* Gottardo Piazzoni, with whom Redmond made several painting trips around California, and Giuseppe Cadenasso, to whom he gave encouragement.  Piazzoni learned sign language, and he and Redmond were lifelong friends.  They roomed together in Parkfield, California, and also in Tiburon.  At that time, it was difficult for artists and would-be artists in San Francisco and in the West to find ways to practice their fine art.  Opportunities in commercial illustration were a little brighter, and Redmond and many other artists were drawn to newspapers and local magazines such as the Overland Monthly as sources of revenue.

In 1898, he returned to California, changed his first name to Granville, and settled in Los Angeles, where he painted many scenes of Laguna Beach, Catalina Island, and San Pedro.  He was married in 1899 to Carrie Ann Jean, a graduate of the Illinois School for the Deaf.  Together they had three children.  While living in Los Angeles, he became friends with Charlie Chaplin, whom he helped in perfecting his pantomime techniques.  Chaplin gave Redmond a studio on the movie lot, collected many of his paintings, and sponsored him in silent acting roles including playing the sculptor in City Lights, and a feature part in You’d Be Surprised.  He also got to know Los Angeles neighbor artists Elmer Wachtel and Norman St. Clair.  All three exhibited paintings with Laguna Beach titles at the annual Spring Exhibition held in San Francisco in 1904.   By 1905 Redmond was receiving considerable recognition as a leading landscape painter and bold colorist.

Redmond’s early works in Los Angeles were mostly moody Tonal landscapes, scenes of farmers and their animals, and nocturnes similar to those by John Bond Francisco and other scenic painters in Northern California.  Redmond also sought subjects throughout the state’s coastal regions, such as Silver and Gold (oil on canvas, Laguna Art Museum), and often summered in Monterey County, where he later settled in 1908.  In 1910, he moved farther north to San Mateo, becoming a member of San Francisco’s art establishment, but he continued to exhibit in Los Angeles and to associate with that city’s artists, returning to live there in 1918.

From 1910 to 1917, he spent time in various Northern California locations, studying and painting.  About the time he moved north, Redmond turned to rendering sweeping terrains covered with highly colorful wildflowers, especially the purple lupine and California’s state flower, the golden poppy.  He developed a colorist method and brushwork linked to Impressionism, though he was motivated more by his subjects than by aesthetic theory.  West Coast critics at that time noted his use of Pointillism* and likened his art to that of Claude Monet and Camille Pissarro.  Although Redmond recognized the public’s preference for his brightly colored poppy pictures, he generally preferred to paint darker, more poetic scenes.  Some of his finest paintings are of Catalina Island in Southern California, and of the oaks of Monterey County in Northern California.

His work is held in many collections including: Laguna Beach Museum, the Los Angeles County Museum of Art, Stanford University Museum, the De Young Museum, the Bancroft Library at the University of California in Berkeley, The California School for the Deaf, the New York City Museum, and the Oakland Museum, where in 1989, a retrospective of his work was shown. He was also a member of numerous clubs, including The Bohemian Club of San Francisco, the California Art Club, The Laguna Beach Art Association, and the San Francisco Art Association. 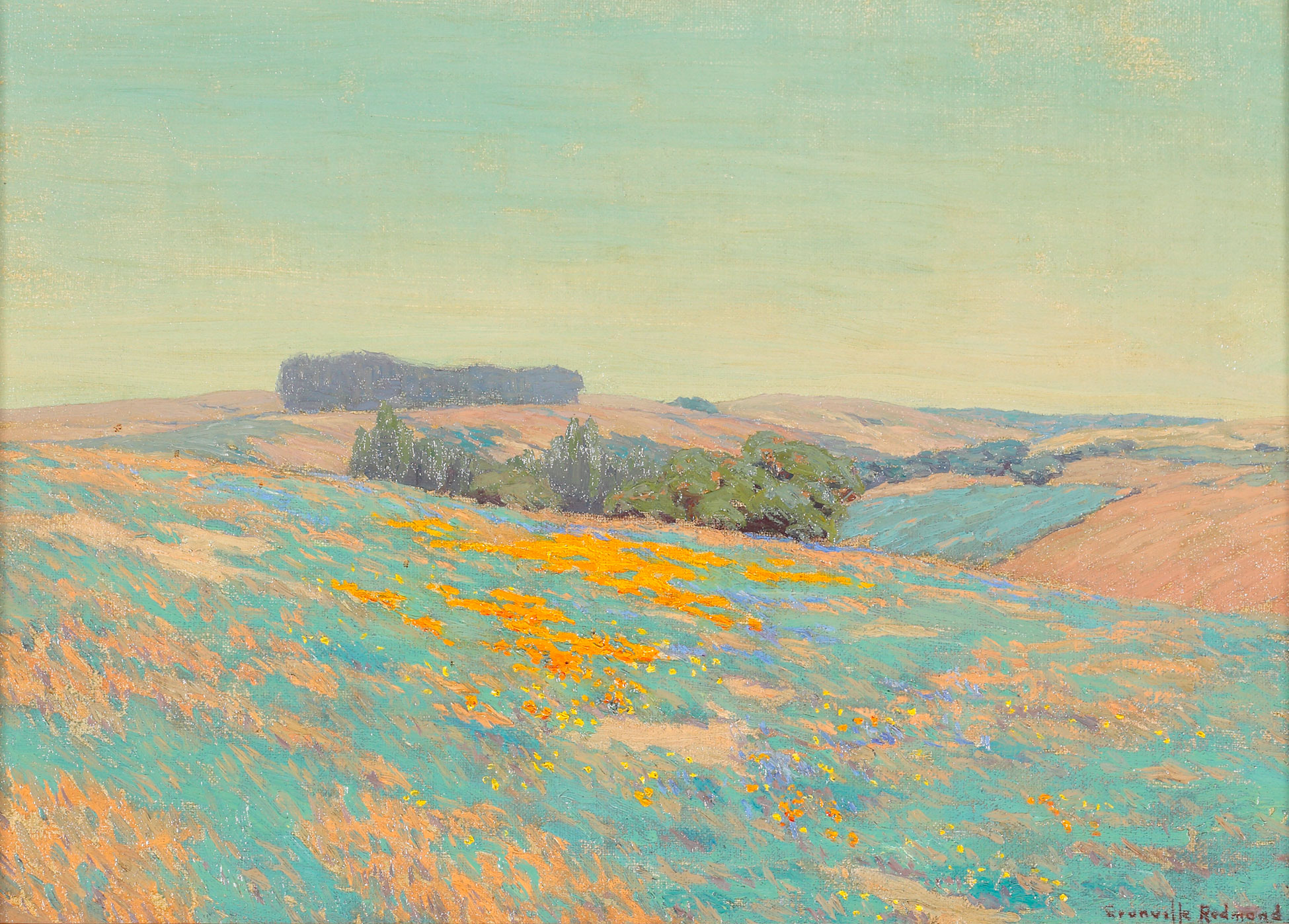 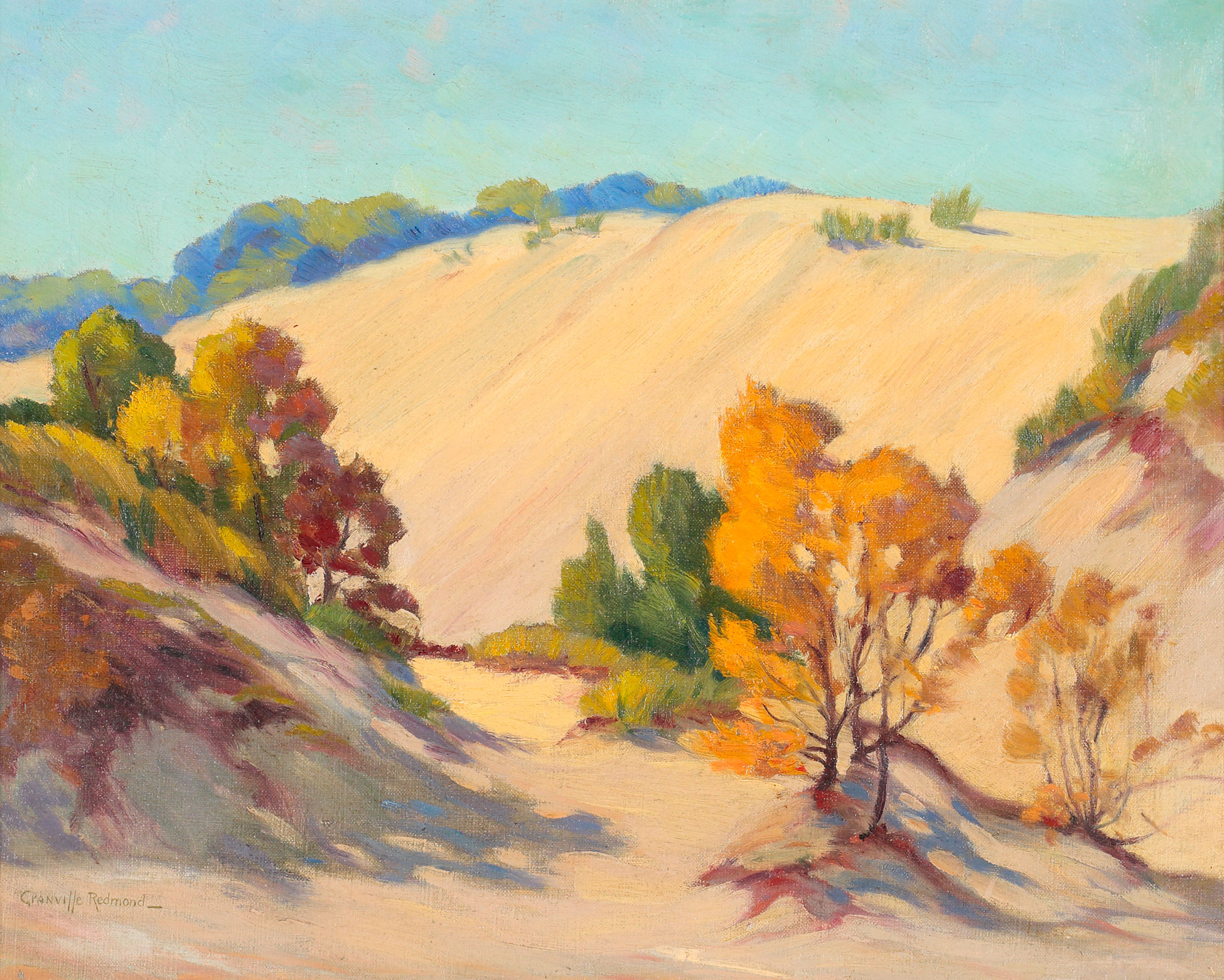