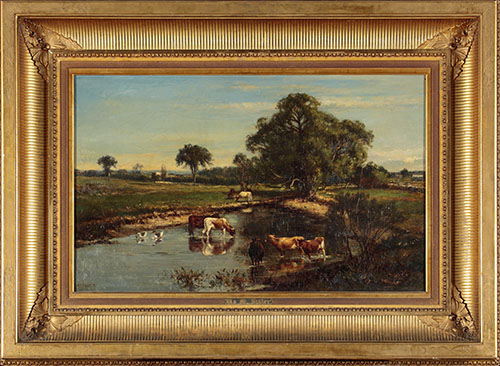 Influenced by study with the great George Inness to become a landscape painter, William Mark Fisher, born in 1841 in Boston, also studied as a youth at the Lowell Institute in Massachusetts.

Fisher went to Paris as a young man of twenty to study with academic artist, Charles Gleyre. In France, he was influenced by Monet and the other artists who would later be known as Impressionists. Unfortunately, Fisher was unable to find any success upon his return to Boston after some years in France.

In 1877, he went to England and rapidly became one of their foremost painters of realistic landscape and animals. Like poet Robert Frost in the 20th Century, another American under-appreciated in his own country, Fisher achieved such a reputation in England that his fellow artists elected him to full membership in the Royal Academy, the New English Art Club and president of the Essex Club.

Fisher exhibited in expositions in Chicago, St. Louis and Paris, winning medals. The artist’s works in the collection of the Museum of Fine Arts in Boston include “Noon,” 1872, “On the Cam,” 1876, and “The Meadows,” 1877. “Feeding the Fowls” is in the Tate Gallery in London.