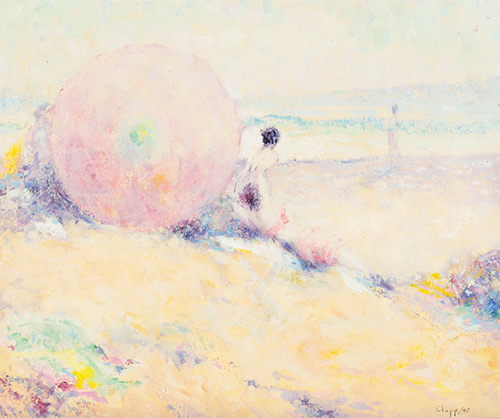 A man who earned a prestigious reputation in Canada and the United States, William Henry Clapp was a painter and etcher of modernist styles ranging from Impressionism to Fauvism to Pointillism.

He was born in Montreal and moved to Oakland, California with his family in 1885 and lived there through his childhood until the early 1900s when the family returned to Montreal. His only sister died when she was age seventeen from tuberculosis, and he was so deeply affected he continued to live with his parents until their deaths.

He studied at the Montreal Art Association School with William Brymmer, the foremost teacher of the city, who, in turn, encouraged his students to study in Paris. Clapps’s good friend was Clarence Gagnon, who later became a well-known expatriate painter, and they took numerous plein-air painting trips together. This experience was the first time Clapp had worked with humble, rural subjects instead of romanticized and grandiose academic subjects.

In 1904, he went to Paris with Gagnon and several other Montreal artists and fell so much under the influence of Claude Monet that some artists accused him of copying the Impressionist too closely. He was also exposed to the cutting edge of modernist movements represented by Picasso, Cezanne, and Gaughin who, among others, were just beginning to exhibit. However, his studies at the Ecole des Beaux Arts and the Academie Julian were quite a contrast to these influences because the curriculum was based on old-guard methods with emphasis on classical subjects and traditional methods.

But Impressionism held the most sway over him, and returning to Montreal he was part of a group of progressive artists that changed the art of that city, and he was later credited as being one of the most significant influences. Between 1906 and 1909, he also painted in Belgium and Spain, whose sunshine had the effect of lightening his palette.

Clapp became a member of the Canadian Art Club in 1912, an exclusive society of those with the most “sophisticated” and avant-garde levels of artistic taste. During this time, he was highly productive completing many impressionist-style paintings. He encouraged experimentation in other artists and was active in 1913 in the Thirtieth Spring Exhibition of the Art Association of Montreal, which, like the Armory Show in New York, shocked the public with exhibits of modernism.

In 1915, Clapp followed his family to Cuba, where his father bought a pineapple plantation, and he sent many scenes of Cuba back to Montreal. However, a hurricane destroyed the plantation, and the family then moved to Piedmont, California where Clapp, shortly after his arrival at the age of thirty-eight, became Director of the Oakland Art Gallery from 1918 to 1949. Throughout these years, he was an aggressive force for modernism and experimentation.

As Gallery Director, he became associated with and arranged exhibitions for the Society of Six led by Seldon Gile. This group of artists banded together to create a modernist style that was uniquely about California and was a rebellion against the dominance of traditional painters Arthur Mathews and William Keith who espoused decorative and tonalist styles.

He also ran the Clapp School of Art in Oakland and had several exhibitions of his monotypes. In 1933, he married Gertrude Schroder, Secretary of the Oakland Gallery.

He was a member of the California Art Club, the Oakland Art League, and the San Francisco Art Association. His works are held in numerous institutions including the Canadian National Gallery and the Oakland Museum. He died of cancer on April 21, 1954.