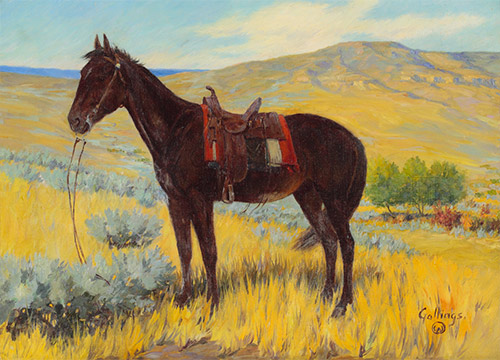 Bill Gollings (Elling William) did paintings known for their accurate accountings of the Old West. Gollings drew upon his own personal experiences as a cowboy, and was also known to have studied and admired the drawings of Frederic Remington, which often appeared in ‘Harper’s Weekly’ magazine.

Bill Gollings was born in 1878 in Pierce City, Idaho. As a boy, he spent much of his time was in New York, Idaho and Michigan. When he was twelve, he and his family moved to Chicago. At age nineteen, Gollings traveled to small mining and cattle towns in South Dakota and Nebraska where he spent most of his time as a sheepherder and cowboy. Despite his ranching activities, he had always possessed an interest in art.

His first exposure to paints was at about age twenty-five when he began working with a set of mail-order paints. After selling several paintings, he was admitted to the Chicago Academy of Fine Arts on a scholarship. Returning to Wyoming, he spent time on a Cheyenne reservation as a cowboy once again. Gollings maintained his interest in art and became proficient in etching under the guidance of Wyoming artist Hans Kleiber.

In 1909, Gollings built a studio in Sheridan, Wyoming, giving up ranch life. He did, however, continue to supplement his income by punching cattle and breaking horses. In Sheridan he devoted himself to his painting of western scenes, using “Gollings” and a pony-track symbol to sign his works.

Sources include:
Peggy and Harold Samuels, “An Illustrated Encyclopedia of Artists of the American West”
Michael David Zellman, “300 Years of American Art”