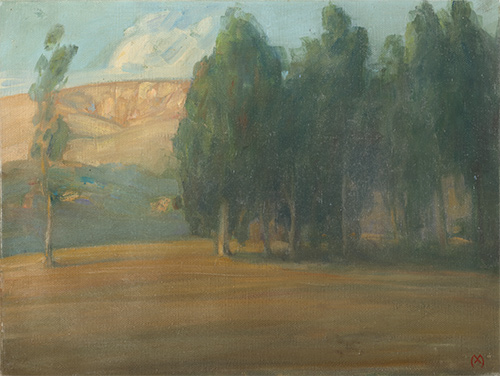 He began his art studies in Mexico, and moved to San Francisco in 1893 when his stepfather became consul-general from Mexico.  Martinez enrolled at the School of Design as a pupil of Arthur Mathews and won high honors including a scholarship to study with Jean Leon Gerome at the Ecole des Beaux-Arts in Paris where he stayed five years, 1897-1901.  During this time, he adopted Tonalism with somber greys, greens and browns. He also spent time with James McNeill Whistler, who had a strong influence on his work, especially with the Tonalist aesthetic.

In 1901, he established a studio in San Francisco and became one of the city’s most colorful, popular Bohemian characters.  Known as “Marty,” he had a shock of jet black hair, wore baggy velvet trousers, corduroy coat, colorful sash, crimson tie, and velvet beret.

Martinez was a good friend of Maynard Dixon, and with Dixon and other ‘bohemian’ cronies, shared many hilarious evenings of wine and food at Coppa’s, a favorite restaurant at 622 Montgomery Street in San Francisco.  In 1905, the two artists took a trip to Mexico together to Guadalajara, the boyhood home of Martinez.  They traveled free by train through Tucson and El Paso on artist passes issued by the Southern Pacific Railroad.

With William Keith and Charles Rollo Peters, he co-founded in Monterey the Del Monte Art Gallery, which was the first gallery dedicated to California artists.  In 1906, his studio was destroyed by fire, and he moved across the bay to Piedmont where the surrounding hills became a frequent subject of his canvases.

From 1909 to 1942, he was Professor of Painting at the California College of Arts and Crafts in Oakland and was so revered the California legislature adjourned early as a gesture of respect the day he died.  A retrospective exhibition in 1974 in Oakland included many Southwest as well as California landscapes.