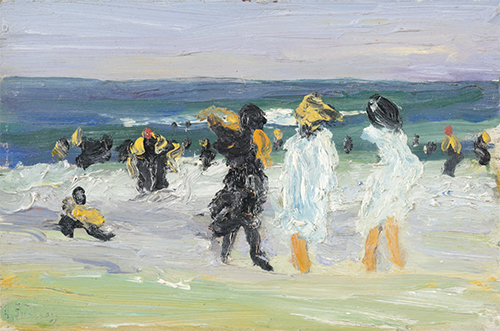 A painter most remembered most for his beach scenes of carefree atmosphere, Edward Potthast was one of the significant 19th-century American artists from Cincinnati, which at the time of his birth was a burgeoning art center and a place of refuge for German immigrants including the Potthast family.

He first studied at the McMicken School of Design and at the Cincinnati Academy, and then went to Europe briefly before becoming established in his native city as a lithographer and illustrator.

In 1892, he moved to New York City where he won the Clarke Prize at the National Academy of Design and many other honors.  In 1910, he was part of a Santa Fe Railroad sponsored trip to the Grand Canyon that included Thomas Moran.  The group spent ten days painting on the South Rim of the Canyon, and this experience was so stimulating to him that he returned to the West several times, developing a tonalist style of painting night scenes.  Apparently he also traveled to California, as several of his paintings are of Catalina Island according to the book The Enchanted Isle and verified by a resident of Catalina.

His studio was primarily in New York City, but in 1912, he spent extensive time in Europe where he enrolled in Academies in Munich, Antwerp and Paris.  He divided his time between illustrations for Harper’s” and Scribner’s magazines but later gave up illustration for full time fine art.

He was an exceedingly private person who died at his easel.