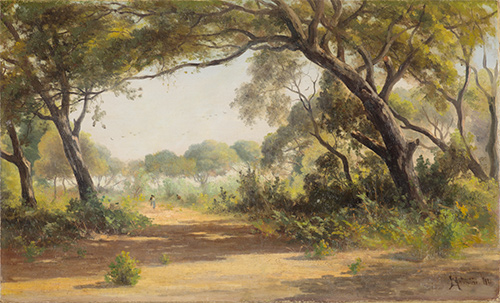 Born in France. L’Aubiniére was a pupil of Corot and Gérome. After a successful exhibition in London with sales to Queen Victoria and Princess Beatrice, he and his wife Georgiana toured the U.S. They painted in Marblehead, MA and Long Island, NY before moving on to Chicago. There they met with great success and were praised by the press. They were residents of San Francisco during 1885-86 and then moved to Victoria, BC.

De l’Aubiniere and his artist wife, Georgina, arrived in Victoria in late 1886. The artists were well-received and commissioned to paint 14 oil paintings for Queen Victoria’s Golden Jubilee in 1887. They traveled through Canada, living in Montreal in 1888 and 1889.
Source: www.askart.com