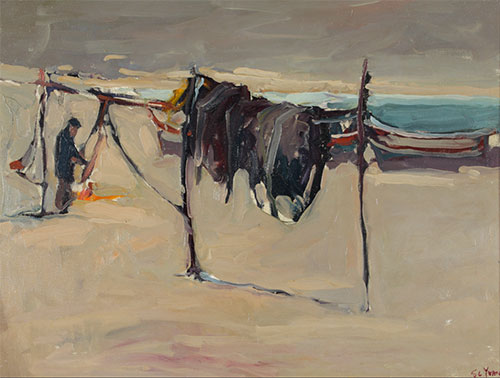 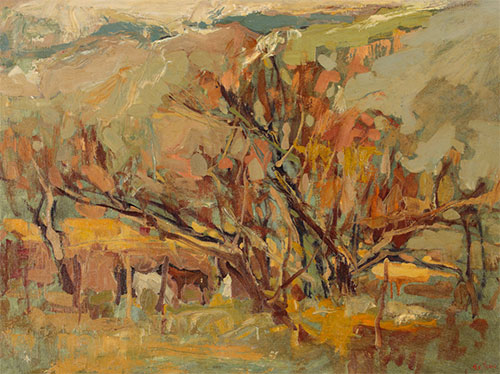 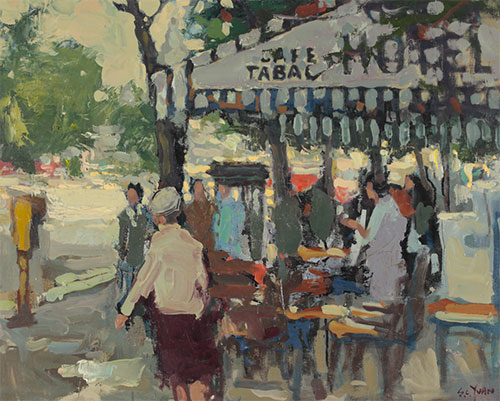 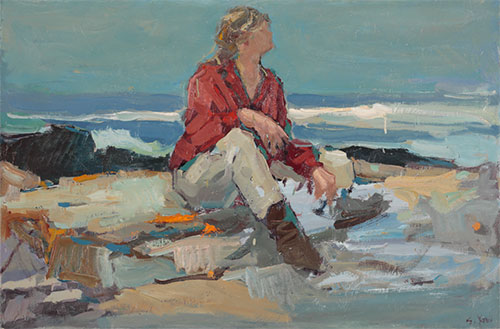 S.C. Yuan, is considered one of the finest painters to come out of the Monterey Peninsula.  A “painter’s painter”, he did work which was favored by contemporary painters who marvel at his effortless technique. “Yuan’s strength as an artist was his ability to communicate a wealth of visual information with swift and concise markings,” says Kathleen Moodie, Curator at the Museum of Art and History in Santa Cruz. “Yuan fused an Eastern elegance of economic line with the robust energy of Western abstraction,” she added in the catalogue for an upcoming show of Yuan’s works.

Yuan said that “Color is like pouring Tabasco sauce over one’s dinner.  Color ruins painting.” A friend explained how Yuan tamed colors:  “After he finished a painting, he would scoop the remainder of the wet paint off the palette into a quart jar. This was the gold, precious stuff. He would start his new paintings from this jar of old paint. “Turp” was added to the mixture from time to time.” Some tabasco!

Yuan was a Western-style painter who happened to grow up in China and made an important contribution to the art of Carmel.  As he becomes better known, much will be made, unnecessarily, about his Eastern origin.  He squinted, didn’t clean his brushes too well, and used paint sludge to produce a subdued palette that reflected the moodiness of his heart.

Cutting his life short to match his father’s time on earth, Yuan worked feverishly during the 25 years he lived on the Monterey peninsula.  He was born in 1911 in the southern Chinese province of Chikiang to a Kuomintang colonel.  Although a first-born son, he was shunted aside by his mother who favored the second born, a daughter.  She sent him to live 40 miles away with his grandparents. Yuan did not have to imagine rejection; it was real.

He grew up, then, not only without his family, but also in a country where East and West were clashing, leaving no middle ground for observers. He must have been affected by the struggle between the moderate, bourgeois Chiang Kai-Shek and the radical dictator of the proletariat, as they staggered across China struggling to replace feudalism.  But, in America, he never spoke publicly about either misfortune.

But, artists don’t need social upheaval to struggle.  Painting and eating are demanding appetites. Yuan’s first job in the Peninsula,1952, was at the Highlands Inn.  His first show was at the Monterey Defense Language Institute, 1953, where he worked as an instructor.  By 1955, his wife Jen-Chi became, and remained, the principal financial support of their family.  That same year, he opened a gallery on Alvarado Street in Monterey and joined the Carmel Art Association.  Throughout his marriage, he astonished Jen-Chi, buying Porsches, secretly borrowing from the banks, taking extravagant trips, and making friends with women visiting Carmel who were often surprised to discover a Mrs. Yuan.

He signed his early paintings “Wellington Yuan,” honoring the last Kuomintang Ambassador to the U.S.  Throughout his career, he occasionally signed his works with the chop symbol for “no name.” And on one occasion he even used the name “Zambini” to disguise his entry of an abstract work in an art competition, fearing that judges would not fairly evaluate the painting since it was such a departure from his regular work.  He won the competition – Best of Show, Monterey County Fair.

Throughout the 1950’s, he entered many shows, won many awards, and showed both Eastern and Western styles.  In 1957, he moved to Carmel.  In 1958, his second-born child died, and he stopped painting for months.  He opened a restaurant on Cannery Row, which failed because his non-egg roll menu was too sophisticated for the times.  By the end of the year, he had his first one-man show, at the Carmel Art Association.  One review noted that his painting was loosening up, letting go of the cameras view of nature.

During the 1960’s, he began traveling, often lavishly, to Europe.  Most of his time he took pictures instead of painting, and told his friends that it gave him material for the scenes people liked to buy.  He was generous with his disdain to both collectors and gallery owners.  Once, when he overheard prospective clients deciding that only one part of his painting worked, he tore out the studied section and offered it for sale, as is.  On other occasions he was known to barge into galleries and sabotage sales in progress.

He financed his first trip to Europe from a $6,000 commission he received for painting a fruit and vegetable mural in the Monte Mart Market in Salinas.  In Europe, he ordered a Mercedes, bought fine Italian suits for himself and dresses for Jen-Chi (which were inexplicably grossly oversized), and quickly ran out of money.  On another trip he sailed with his Cadillac, which he had to send back after finding that he could not pass through the narrow streets of Europe.

He won “Best of Show” at the Monterey Peninsula Museum of Art in 1967, which led to a one-man show there in 1968.  In 1969, he was back in the restaurant business, opening up the Merry Peach in Carmel Valley, which he filled to the ceiling with his paintings.

Paintings he didn’t like, he stored under his house; the favorites were piled everywhere else.  He saved his “chickens” (the best of his paintings) for his daughter Rae, so she would never have to work; and he tried to sell only the “eggs” (copies of the chickens).  When Sheila Shepard, his last student, helped him move, he became frustrated and angry because she tried to evade his questions about which paintings to save.  He started a bonfire in his backyard and began burning some of his paintings, including one that he told her was a “$10,000.00 Hansen.”

His last one-man show was at the Pacific Grove Art Center in 1972.  Thereafter, Jen-Chi finally left him – perhaps exasperated with his moodiness, flippancy, and self-indulgence.  His grief over the lost marriage dove-tailed neatly, however, with his occasionally shared prediction that he would not outlive his fathers age; and in his last two years he painted furiously, producing some of his finest work.

On September 4, 1974, he hung his last show at the Carmel Art Association.  Two days later he killed himself.  After three days of shock and mourning, his fellow members bought out almost the entire show.

Yuan said that “Art should have something to say to the viewer, and only then is it honest art, which has permanent value.”  His moodiness is the most honest trait in his paintings and in his life.  And the skill with which he expressed that moodiness places him with the best of the Monterey school. He fits easily between Hansen’s bold and colorful exaltation of the majestic sea and Fortunes exquisite overview of the Peninsula. Yuan’s still lives will appear in a traveling museum show beginning in June.