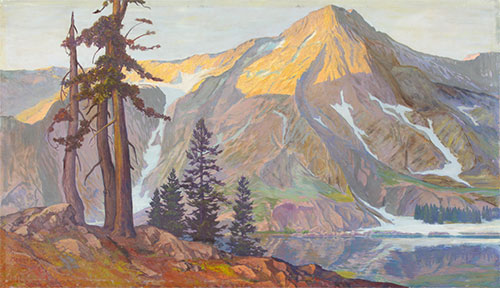 Maurice del Mue was born in Paris to a French mother, Ava, and a Swiss father, Santino del Mue.  Santino came to California to work in the silver mines, and Maurice and his mother followed when the future artist was five years old.

He was a regular exhibitor in Art Association and Bohemian Club shows.  In 1906, Laura Bride Powers, art critic for the Call, announced that “del Mue has arrived…I commend to you his exquisite presentations of the phases of nature that whisper to him.” (March 18, 1906).  In 1907, Elise Graupner noted that “(del Mue) sees no garish colorings in nature—just the soft, subdued tones that please the eye and to which one returns again and again.” (Call, November 3, 1907).  Lake Tahoe appears as a subject for his landscapes for the first time in 1913:  “Del Mue handles a Tahoe scene with great vigor and depth of color,” the San Francisco Chronicle observed, “striking a new note in his work.” (October 26, 1913).  Del Mue had a particular fondness for a special shade of blue that he humorously referred to as “del Mue blue.”