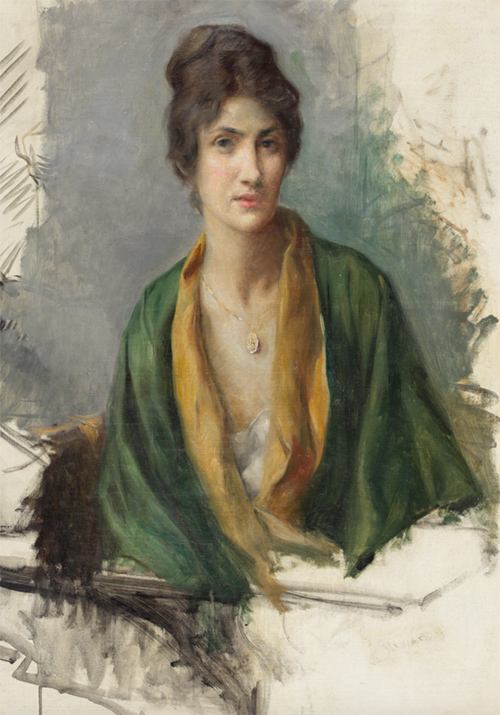 Julius Stewart was a figure and genre painter from Philadelphia who spent almost his entire life in Paris.  From the 1880s through the first decade of the 20th century, he ranked with John Singer Sargent as one of the most popular expatriate American painters in Paris.  He was following a genre begun by his friend, Jean Beraud, but Stewart’s more vivacious work was considered especially American.

He painted the life he thoroughly enjoyed -Parisian high society. Stewart’s works are spirited and realistic, full of fashionable women, sumptuous fabrics and elegant drawing rooms.  In addition to portraits of his well-to-do friends, Stewart fullfilled commissions for portraits of society figures and celebrities, among them the actress Sarah Bernhardt.  “His portrayal of Bernhardt in the double portrait, Reading Aloud (circa 1883, private collection) is nearly identical to that of the female reader inAn Enthralling Novel, right down to the facial features, center-parted upswept hairdo, ruffled high-necked blouse, and embroidered jacket.  Both paintings were executed around the same time, so it is probable that the reader in An Enthralling Novel is Bernhardt.  Period photos from the mid 1880s of Bernhardt show her with the same hairstyle and style of clothing.” (Carol Strone Art Advisory)

Stewart was born in 1855, and his family settled in Paris when he was ten years old. His earliest painting is dated 1876.  His father, William Stewart, was an outcast art collector, who specialized in works of the contemporary Spanish-Roman school, including Zamacois, Fortuny and de Madrazo.  These artists had a great influence on Stewart.  In the 1880s, he studied with Zamacois and de Madrazo, as well as with Jean Leon Gerome.

Stewart’s first success was being chosen to exhibit at the Paris Salon in 1883.  His reputation was firmly established with, The Hunt Ball (1885, Essex Club, Newark) and The Hunt Supper (1889, Buffalo Club, New York) was shown at the Paris Exposition.  His high society women portraits show a particular fascination with their evolving roles in a changing society, from the depiction of beauty for beauty’s sake to the portrayal of the educated sophisticate.  In An Enthralling Novel he succeeds in conveying the reader’s concentrated attention to the book, thus portraying her as a well-read woman and not just another pretty face.

At the same time that Stewart was painting high society scenes, he painted nudes out-of-doors, a subject more acceptable in France than in America in the 1890s.  By 1905, he had a religious crisis and conversion, toning down his subject matter.  At the beginning of World War I, he served in the Red Cross ambulance corps and suffered a nervous breakdown.

Stewart remained a bachelor, and died in 1919, having returned to the United States.