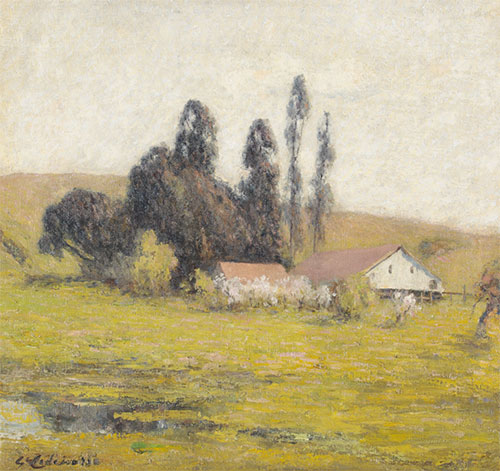 Born near Genoa, Italy on Jan. 2, 1858, Giuseppe Cadenasso, at age nine, sailed from Genoa to northern California where his uncle owned a vineyard.  As a young man he moved to San Francisco where he worked as a barber, waiter, and sang Italian opera at the Tivoli Opera House.

His raw talents as an artist were discovered by Jules Tavernier who took him to the studio of Joseph Harrington who gave him free art lessons.  He later earned enough money for further study under Arthur Mathews at the Mark Hopkins Institute.

His studio-home on Russian Hill at 17 Macondray Lane was called “The Sign of the Eucalyptus.”  He later moved across the bay where he headed the art department at Mills College from 1902.

Cadenasso painted scenes of the marshes and eucalypti of Berkeley, Oakland, and Alameda.  Motivated by tone and harmony, he developed an original style and often used his fingers to spread the colors.  His lyrical landscapes earned him the title of “the Corot of California.”

Returning home from seeing his son off to the World War, Cadenasso was struck by an automobile at Powell and Post streets in San Francisco and died of injuries on Feb. 11, 1918. (Four days earlier on the same street, the artist Ben Raborg was killed when hit by a cable car.)