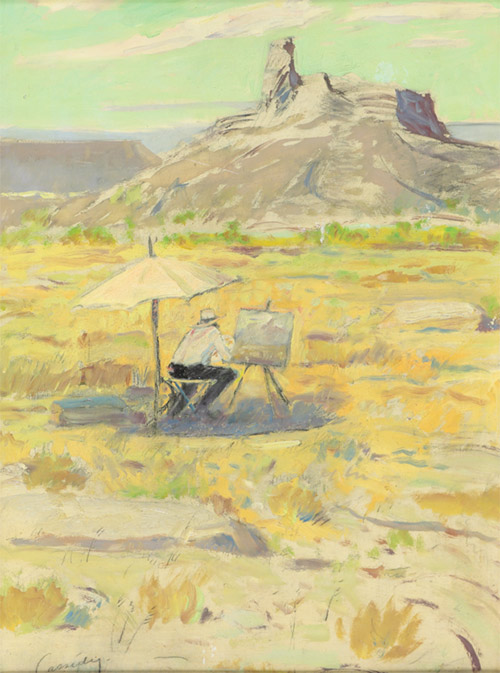 Gerald Cassidy, known for his subjects of the Southwest including Indian portraits and for his lithography, was born in Covington, KY., and grew up in Cincinnati, Ohio.  He studied at the Mechanic Institute in Cincinnati and with Frank Duveneck at the Cincinnati Art Academy.  He worked as an Art Director at a lithography firm in New York City and during this time, studied briefly at the National Academy of Design and the Art Students League.

Diagnosed with tuberculosis at age 20, Cassidy went to a sanitarium in New Mexico, a move that introduced him to life in the West.  He first earned his living by painting portraits of Indians and scenes of the Southwest that were intended to be reproduced on postcards.  When his health got better, he moved to Denver. and there established his reputation as a lithographer by doing work that was used for magazine illustrations, murals, and ads.

In 1912, he married the sculptor and writer Ina Sizer Davis, who became a noted author of numerous articles on New Mexico art colonies.  The couple settled in Santa Fe where Cassidy began a project to document the culture of Pueblo Indians.  The commission to do this work came from Edgar L Hewitt, Director of the School of American Archaeology.  Hewitt regarded the life of the Indians as the counterpoint to the materialism of white civilization.  Cassidy became so committed to this project that he decorated his home with altar paintings from the ruined Nambe mission church.

In Santa Fe, he was only the third artist of English origin to establish residency there.  During this time, he changed his signature from Gerald Ira Diamond Cassidy to Gerald Cassidy, placing the Tewa Indian sun symbol (symbol of circle with four lines) between his first and last name. He also painted many landscapes and large historic murals for commercial buildings including the Indian Arts Building.

A highlight of his career occurred in 1915 when he was awarded the Grand Prize and Gold Medal for his murals in the Indian Arts Building, at the Panama-California International Exposition, San Diego, California.

Nineteen years later, in 1934, Cassidy met an untimely death from lead poisoning while working on a mural for the Federal Building in Santa Fe.