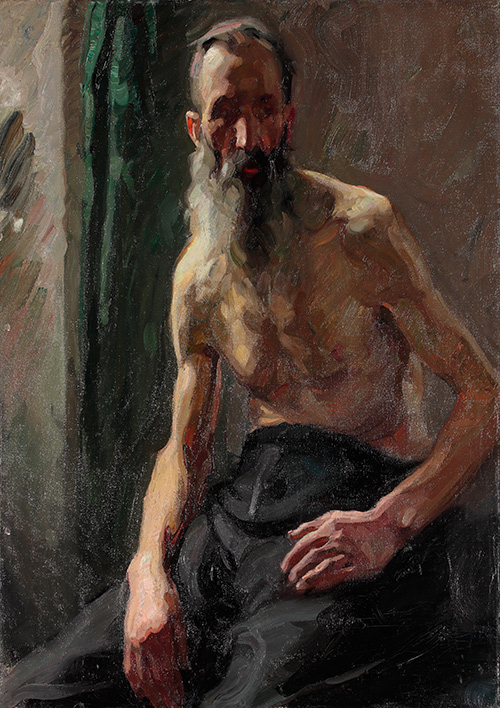 Born in Pennsgrove, New Jersey and raised in Chicago by German immigrant parents, Ernest Hennings became a highly recognized painter of western subjects, particularly of Indians of New Mexico where he joined The Taos Society of Artists. Of his painting, it was written: “He was most successful in unifying the human figure with a sunshine-filled, happy, natural setting.” (Zellman 808). The last project of the artist before his death in 1956, was a series of paintings at the Navajo Reservation in Ganado for a Santa Fe Railroad calendar.

When he was young, his family moved to Chicago, and for five years, he studied at the Art Institute of Chicago from which he graduated with honors.  After working six years as a commercial artist, he enrolled in 1912 at the Munich Academy in Germany where he learned to paint in the style of academic realism. Walter Thor, a portrait artist, was one of his highly influential teachers, and he emphasized the need of the artist to enter the soul of their subjects.  Hennings also studied with Franz von Stuck, a proponent of classical theories of beauty, patterning, craftsmanship and drafting.

At that time pre-war Munich was one of the most exciting cultural centers in Europe, and the battles between classical academy art and “Jugendstil,” a German Art Nouveau movement were in full swing.  Hennings remained somewhat open to the latter theories, thinking it best to be open to a variety of influences and then settling on one’s own style.  In Munich, he also became friends with artists Walter Ufer and Victor Higgins.

In 1915, at the beginning of World War I, he returned to Chicago as a commercial artist and muralist who tended to paint with thick, broad brush strokes and darkened palette of the Munich School.  But he also reflected the waving, sinuous lines of “Jugendstil” painters.

In 1917, Carter Harrison, a wealthy patron and former Mayor of Chicago, and Oscar Mayer, Harrison’s partner in an art-buying ventures, sponsored Hennings on a trip to Taos, New Mexico, a life-changing venture for Hennings.  Three years earlier Harrison had done the same for several other artists including Ufer and Higgins.  In 1921, Hennings became a full time resident of Taos, having had a successful one-man exhibition in Chicago at Marshall Field and Company. At that event, Hennings met his future wife, Helen Otte, and upon marrying the coupled traveled in Europe for sixteen months.

In 1924, Hennings joined his friends Ufer and Higgins as a member of The Taos Society of Artists, whose purpose was to generate sales of their art work.  Ufer and Higgins had been members for several years.

For the remainder of his career, Hennings was devoted to painting the West including commissioned portraits of Navajo Indians for the Santa Fe Railroad.  However, his primary subjects were the New Mexico Indians, which he portrayed as dignified heroic people.  His technique was to paint the background first and then put figures in various positions to determine which was the most successful composition. He worked on several canvasses at once and disavowed modernist avant-garde movements.  The bright colors of his paintings have remained intact because he applied his oil paints thinly and allowed long periods of drying before applying varnish.  This method has prevented yellowing and cracking.

Few of his paintings are dated.  His wife, Helen Otte Hennings, kept a meticulous record, but when she moved from Taos to Chicago in 1979, it was lost, and no copy has ever been found.