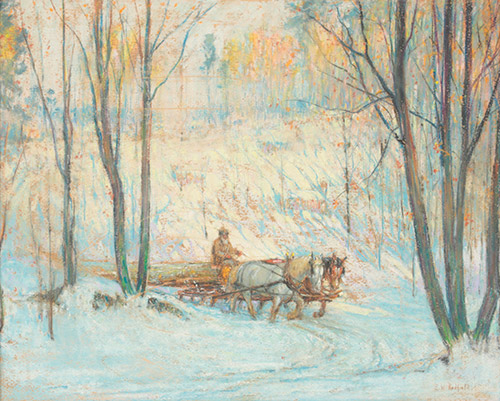 Born in Bridgeville, Delaware, Edward Redfield moved to Philadelphia as a youngster and lived much of his life near New Hope in Bucks County, an easy distance north of Philadelphia. There he became the leader of the colony of artists known as the New Hope Impressionists. In modified Impressionist style and methods, he did many landscapes, especially panoramic snowscenes of the area, and used thick paint applied to large canvases with long brush strokes instead of the feathery strokes of true French Impressionism.

He usually finished his paintings in “one go” meaning plein-air, sometimes strapping his canvas to a tree on blustery days and standing knee-deep in snow. In the summers, he painted at Boothbay Harbor, Maine. He was also a teacher at the Pennsylvania Academy and a skilled craftsman who built his own house, cabinets and restored antiques.

Redfield took his early training from a Mr. Rolf in order to pass the examination at the Pennsylvania Academy, where he studied from 1885 to 1889 under teachers including Thomas Anschutz, James Kelley, and Thomas Hovenden. A fellow student was Robert Henri, with whom he developed a strong friendship, and with whom he traveled to Paris in 1889.

In Paris, he studied at the Academie Julian and the Ecole des Beaux Arts and his teachers were Adolphe Bouguereau and Tony Robert-Fleury. However, he wearied of the pervasive academic styles at these schools, and spent much time painting landscapes in the Forest of Fountainbleu outside of Paris. He also painted at Barbizon and Pont-Aven.

Married, he and his wife returned to Pennsylvania in 1898 and decided to settle in Center Bridge in Bucks County near New Hope. His presence in Bucks County was enough to lure many younger artists to the region making it a nucleus for the American Impressionist movement. Holding a special affection for this man, author and fellow-Pennsylvanian James Michener wrote that Redfield “had a cluttered workshop on the canal in which he did large landscapes, especially snow scenes, and made furntiture and delightfully desinged hooked rugs. I liked his work, and I liked him, a big Russian-bear kind of man.” (Folk 10)

Towards the end of his life, he burned hundreds of paintings that he regarded as inferior. He died in 1965 in Center Bridge, Pennsylvania, and his work received little attention during the decade following his death. However, he has come to be regarded as a key American Impressionist and appreciated for his influence at New Hope.