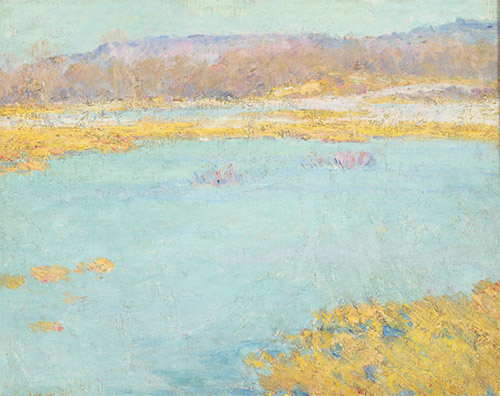 Born in London, England, Dawson Dawson-Watson was a landscape, portrait, genre, marine, and mural painter and graphics artist who was the son of a popular English illustrator.  He attended grammar school at Southsea, Hampshire.

His first art teacher was Mark Fisher, with whom he studied in Steyning, England. A wealthy local brewer then sponsored Dawson-Watson’s art training in Paris that included classes with Carolus Duran.  While in France, he also studied with Louis-Joseph Raphael Collin and Pierre Paul Leon Glaize.

The artist lived in Giverny, France near the home of Impressionist Claude Monet for five years, 1884 to 1890, and in 1888 married an American women, Mary Hoyt Sellar, who was traveling in Europe.  They came to the United States in 1893 at the encouragement of artist James Carroll Beckwith, and Dawson painted in New England until 1897.   He was hired as director of the Hartford Art Society in Hartford, Connecticut.

In 1897, he returned to England but was not successful at making a living, and he also spent three years in Canada.  Returning to the United States, he taught from 1903 to 1904 at Byrdcliffe Colony, a center for the Artist and Crafts Movement in Woodstock, New York.  This period was followed by teaching for eleven years at the St. Louis School of Fine Arts, serving as art director of a pageant in Brandesville, Missouri, and in 1918, serving a year as director of the San Antonio Art Guild.

In 1926, he settled permanently in San Antonio, encouraged by members of the San Antonio Art League, and he participated in many exhibitions, often winning prizes, including first place ($5,000) at the 1927 Edgar B. Davis Competition.  He also painted the Grand Canyon in Arizona.  Murals includeMeditation in the Thomas Jefferson High School in San Antonio, and The Open Book of Nature at Wichita High School in Kansas.