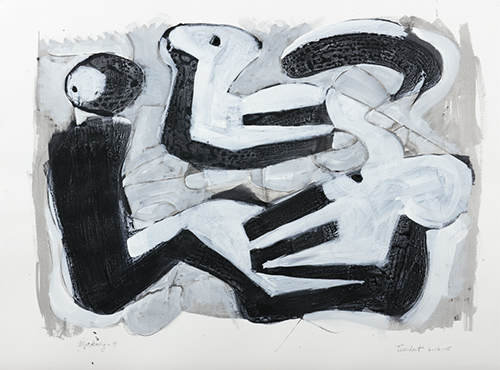 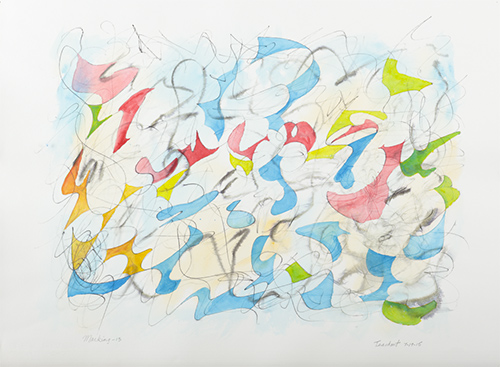 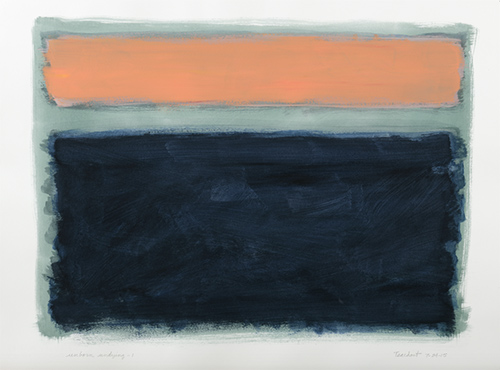 It  was after a return from the service in the late 1950’s and within the context of studying for a degree in landscape architecture that David Teachout began his formal development as a painter.  First in his native California and then in North Carolina where he completed his degree and had begun to teach Teachout rediscovered the impulse to create that had lain dormant since childhood.  Abandoning university teaching and work in established design offices in 1964 he moved with his young family to Santa Cruz California in order to devote himself to painting and work as an independent environmental designer.

Teachout began painting as an abstract expressionist.  Discovering early on a high interest in color textures and gestures quickly gave way to color fields and simple compositions which allowed color to be the prime element of expression.  The importance of color led him to make distinctions in which contrast existed only because of color differences.  He began to see color as form. Simple shapes began to break off edges and eventually become shapes composed of bands of color interacting with each other and their ground.  These bands became the object and were curved and linked at the ends into continuous bands of color.  The paintings grew larger.   During this early phase of painting he progressed from using primed canvas to using unprimed canvas stained with acrylics.

In 1971 he began the Falling Series experimenting with un-stretched and stretched canvas which was hung shaped and folded in preparation for the poured paint.  The sense of duration occurs in some of these works.  Color relationships were approached with greater abandon and resulted in higher contrasts.  These works range from 6′ to 12′ in height and are meant to be stretched in their final form.

In the early 1980’s Teachout began a series of small works on paper utilizing views out of his studio windows as starting points for abstraction.  Simultaneously he was drawing from the figure.  The works on paper evolved during the 1980’s into a fully developed ‘Santa Cruz’ series of paintings.  Always the movement was toward abstraction with the later paintings in the series entirely self referential.  Various spacial and structural notions emerged in this series.  For example diagonals which appeared rather unconsciously in earlier works were given later in the series conscious consideration by crossing the diagonals as primary definitions of squares.

This process evolved through the X figure and in Santa Cruz’ #27 & #28 was transcended to become an upper and lower relationship of the diagonals leading to solid/void and ground/sky associations.  These spacial and structural considerations were always done within the larger context of color relationships as the primary concern of he painter.  The very subtle color effects the transparencies and the evidence of process are qualities available to the viewer in the presence of the paintings and can only be hinted at in reproductions.  Many of the ‘Santa Cruz’ series have been exhibited in non-commercial exhibitions  in California.  ‘Santa Cruz’ #15 is included in the growing collection of Teachout’s at Occidental College in Los Angeles.

Paintings by David Teachout are part of the Farhat Art Museum Collection in Beirut, Lebanon.

Submitted by Naim I. Farhat